This came originally from our friends in the Syracuse Peace Council.

You’re needed to sign a petition <http://act.rootsaction.org/p/dia/action3/common/public/?action_KEY=12254>  to close the U.S. Ramstein Air Force Base in Germany

Ramstein plays a crucial role in U.S. drone attacks in the Middle East and Africa.

About the petition
The petition calls for closing the Ramstein Air Base and not replacing its functions anywhere else. It will be delivered in September to the German government by U.S. drone whistleblowers and also to the U.S. government in Washington D.C.

What happens at the U.S. Ramstein Air Base?
Ramstein as the high-tech heart of America’s drone program – it is the site of a satellite relay station that enables drone operators in the U.S. to communicate with drones in Yemen, Somalia, Afghanistan and other targeted countries. For details see the investigative report <https://theintercept.com/2015/04/17/ramstein/>  by Der Spiegel and The Intercept.

And what about the German people?
Last Saturday, on June 11, thousands of Germans came to form a human chain around Ramstein Air Base and demand the U.S. drone war via Ramstein stop.
See (among others):


And what about you?
Again, please sign the petition <http://act.rootsaction.org/p/dia/action3/common/public/?action_KEY=12254>.

For questions or to participate in the Syracuse Peace Council’s Ground the Drones, End the Wars work, contact
Carol at carol@peacecouncil.net or 315.472.5478.
(And we demonstrate every 1st and 3rd Tuesday from 4:15-5pm at Hancock (Drone) Airbase on E. Molloy Rd. in Syracuse.) 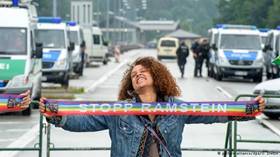 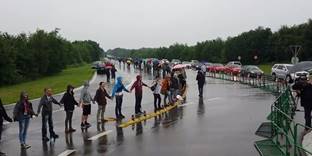 SPC Announcements listserv is an announcements listerv, in which subscribers receive a limited number of emails per week from the Peace Council. If you wish to engage in email conversation, check out the Peace-List and our other listservs at http://peacecouncil.net/stay-in-touch