Syracuse, NY – On Friday, December 23, four activists were arrested at the main entrance of Hancock Air National Guard Base as many throughout the world prepare to celebrate the birth of Jesus, the Prince of Peace from Palestine.   The base is located on East Molloy Road in the town of DeWitt, E. Syracuse New York.

Upstate Drone Action members engaged in civil resistance by setting up a traditional Christmas nativity scene at the main entrance of Hancock Reaper Drone Base.  Mary, Joseph and the infant Jesus were attended by a shepherd and a wise man.   Angels and carolers played a supporting role from across the street.

While being handcuffed, Mary (Bev Rice) noted that, “If Herod had a Reaper, Jesus, Mary, and Joseph would have been been incinerated.” Joseph (John Amidon), also arrested, said “The indiscriminate and illegal killings of so many holy families in the Middle East must stop!”

According to “LIVING UNDER DRONES: Death, Injury and Trauma to Civilians from US Drone Practices in Pakistan,

published by Stanford University and New York University Law Schools, such missions are responsible in that region for the deaths of hundreds of noncombatants, including women and children, and for the terrorizing of thousands more.  [Note that the link Judith sent out didn’t work on my computer, but this link worked.]

Today’s civil resistance action is one chapter in Upstate Drone Action’s Gandhian Wave, a six-year scrupulously nonviolent campaign to expose the Hancock AFB war crime. Since 2010 there have been over 170 anti-Reaper arrests at Hancock.

Blog: Reports from Hancock and Beyond <http://blog.upstatedroneaction.org> 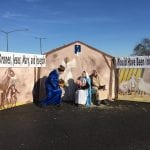