This is an inspiring message from GVCP member Judi Salsburg.

I spent several days this past week in Washington DC attending the annual conference for the National Association for Developmental Education (NADE).  For those of you who don’t know, this the national professional organization for those of us who work in the field of facilitating the success of college students.  NADE’s focus is on all students in higher ed, but our particular focus is on students who are often underserved in society and education.  We believe in equity in and access to higher education, and most of us are willing to do just about anything that will help college students, especially those who are low-income, immigrants, racial minorities, and first-time generation in college.  Anyway, there we were all gathered in National Harbor, MD, just out of DC, in what is often a welcome sense of community with like-minded colleagues.

​I only mention all of this to provide some context to the other conference going on simultaneously in the convention center.  The Conservative Political Action Conference (CPAC) was going on simultaneously, and apart from having to share public space with NRA, white supremacists, Tea Partiers, and folks wearing t-shirts with pictures of Che Gevuera with script that says "Socialists Are Fags"–just to give you a quick snapshot, though by no means complete–the place also turned into a police state with Secret Service, police, and privately hired, heavily armed security.  Some of the speakers included Betsy Devos (who says that college professors brainwash students) Ew), Rick Perry, LaPeierre (the NRA guy) (Ew), and Mike Pence (Ew Ew Ew).  But this is not a complete list of speakers.  Then, Trump came on Friday.  You might be able to imagine how most of us in NADE, who are also trying to hustle up the most basic funds to serve our students, found the whole scene was utterly grotesque.  And NADE leadership was furious that all of this was going on simultaneously.

Anyway, I wanted to let you know that on Wednesday, when we figured out Pence and Trump were coming, a small but dedicated group began to mobilize and plan an action for Friday morning during Trump’s visit.  We scrounged up some supplies (giant post-its from a colleague who used them for her presentation) to make signs and decided on when and where we’d we’d hold the demonstration.  On the day of the action, I began to inform the secret service of our intended  plans.  (In many ways, this became the most interesting and intense part of the action, because security came in, en force, and we began negotiating some of the details of what we were intending to do.)  At no time were we asking permission, but rather extending a courtesy to security.  Plus, I’d never done an action with secret service in the room, and I was concerned that when we started unrolling our signs, which to them could look like something happening over people’s heads in the main conference area, they could have legitimate reason to get riled up. Anyway, by the time 10:45 rolled around, and while Trump was mid-speech, we held up our signs in a common area of the conference.  Our words hung in the air while Trump was in the next room, about 50 feet way, saying terrible and hateful things.

It was also interesting that as soon as our NADE colleagues saw us, they joined in, wanting to hold signs, and visibly relieved to see and hear what many had wanted to say since the conference began.  I’ve attached a picture of the signs before we took our spot in a loft area overlooking the main conference lobby:  "Love and Peace Trump Guns and Hate," "Make America Think Again," "Listen to the Students," "From California to the New York Island:  No Wall," and "The Pedagogy of Love."  Another friend and colleague took pics and videos, but I don’t have those yet available.  We held these signs for about 15 minutes.  Ironically, our NADE colleagues cheered and clapped, which freaked out security and the​y then shut us down, though we continued our action in the less-public NADE-centered area of the convention center.

What was especially remarkable was how our action then prompted others to spontaneously join in.  Within minutes, people we standing with us, so what was originally about 7 people doubled and then tripled.  At 11:15, I wanted to attend a concurrent session, and some stranger stepped in and took my sign.  When I returned an hour later, an entirely new team was keeping the action and message alive.

Afterwards, I approached all the people we’d spoken with earlier–secret service and many, many security people, and they commented on how they were appreciative of what we were doing.  They mentioned they couldn’t say any more, but were thankful that we did what we did.  One high-ranking security person who was intially VERY NASTY ended up thanking us for what we did.  The top security boss even told me that she couldn’t say any more because of her position, but I could totally tell that she was in-sync with our message.  She mentioned how respectful we were, and I told her that we both had acted with respectful communication, and if we had more of that going on in our country we wouldn’t have needed to take this action.  She then told me that teachers have such a hard job, that she knows we work hard, and that we’re underpaid.

I wanted to share this with you because the week was so bizarre, and I’ve learned how incredibly organized the alt-right is  But for about ten intense minutes and then for about an hour and a half of additional but low-intensity action, we exercised our First Ammedment rights.  It was very moving to give voice to what others were thinking and empower them to join in.  It was also satisfying to have a sense of control over the message we were consuming.  And it soothed my soul to know that, even for only a few minutes, we stood on the side of sanity and peace.

(Simultaneously, it was already a full conference for me as a presenter on Thursday afternoon and active participant in many professional activities throughout the week.)

I thought you’d all appreciate this story of grassroots organization and action. 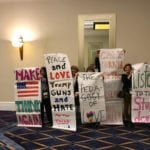