US Airstrikes and the Iran Deal

Dear GVCP member,
President Biden promised diplomacy with Syria and Iran, and that’s what we need.  We must convince the President to seek a peaceful solution to the knotty—and confusing—Middle East conflict.

I think Win Without War explains this very well.  There’s an action item, which is user-friendly.

Rejoining the JCPOA is the ONLY way off Trump’s path to war with Iran.

U.S. airstrikes in Syria on alleged Iranian-backed militias this week are a stark reminder of the choice we face: continue the same failed “maximum pressure” campaign towards Iran with its countless deaths and unrest OR take the proven path of peace by returning to diplomacy.

Missile strikes, retaliatory bombings, and the ever-present danger of all out war are *not* inevitable. The good news is, there’s an offramp toward diplomacy available right now. President Biden has to take it by rejoining the Iran deal (the JCPOA if we’re being fancy) — quickly.

The Washington war caucus isn’t just going to give up. But we know we can win because we’ve done it before — so let’s do it again! Let’s show the Biden administration that there is a MASSIVE movement of people who want a world built on peace and justice, not senseless war.

Sign if you agree: The United States must rejoin the Iran deal! 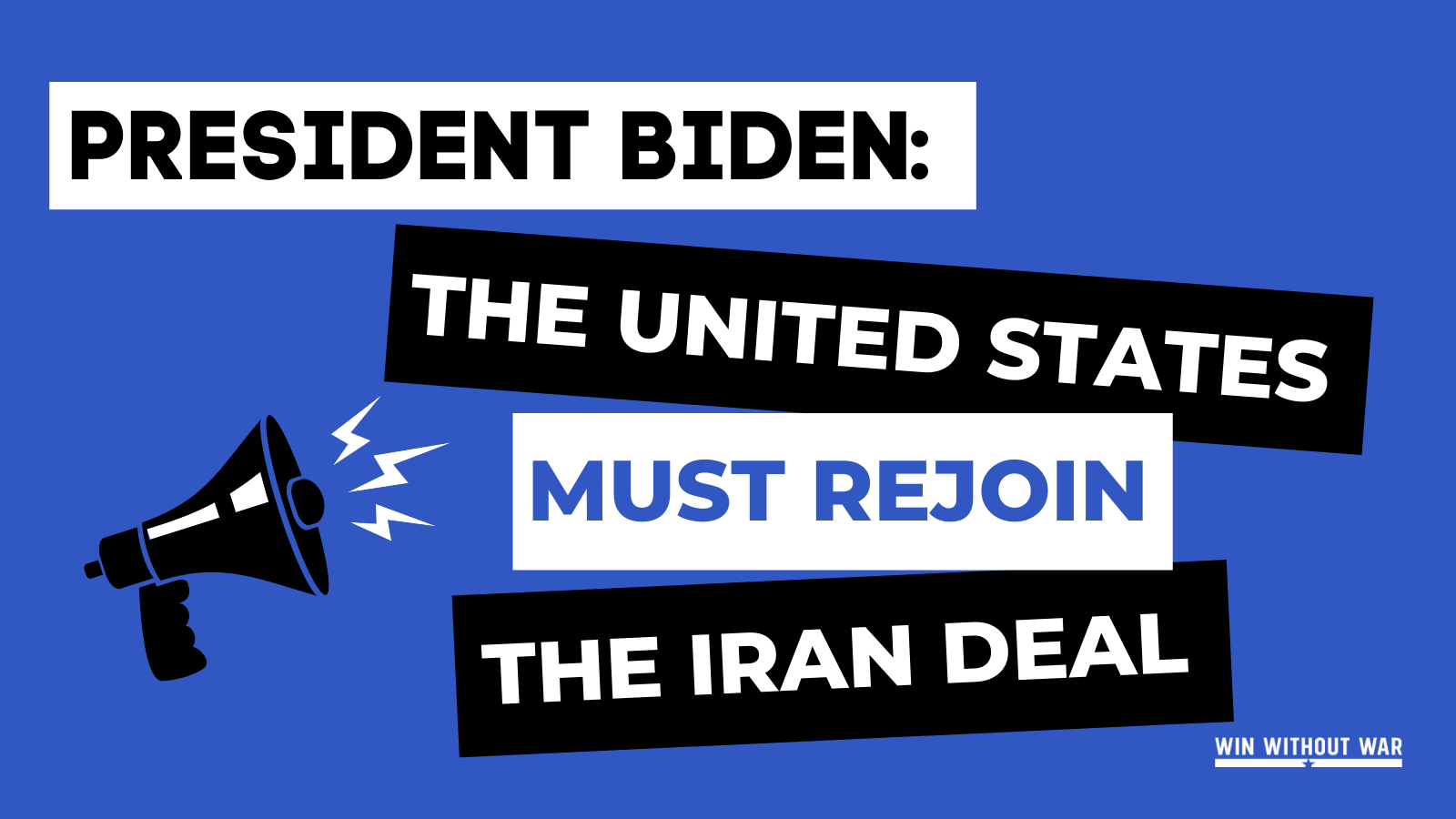 Leaving the Iran deal was a catastrophic mistake. The ever-present threat of all out war looms constantly because Trump walked away from diplomacy.

His failed “maximum pressure” efforts not only brought the United States and Iran to the brink of war multiple times, it resulted in unimaginable human suffering in the face of COVID-19 through sanctions, the expansion of Iran’s nuclear program, more corruption and even less respect for human rights in Iran, and a deepening humanitarian crisis within the country.

The way out of this unnecessary and violent feedback loop is for President Biden to immediately make good on his campaign promises to return to the Iran deal. Then, we need him to build on that progress and reset the entire U.S. approach to the wider region to one that minimizes suffering and fosters lasting peace.

But the clock is ticking and the challenges are rising, which is why we need to take action now. With hawks circling all around, we need BIG strides not small steps — and one way we can move in the right direction is by strengthening the resolve of President Biden’s Iran deal negotiation team.

Sign if you agree: The United States must rejoin the Iran deal!

Last night’s airstrikes were a stark reminder of the stakes involved. Violence like this has become sadly commonplace for Syrians who have seen their country used as a battlefield for proxies for years.

The U.S. has waged war throughout the Middle East for decades with the absurd belief that somehow a few more bombs would eventually bring peace. Our movement is built on the belief that we have to choose another way, one built on diplomacy, justice, and all governments listening to the will of their people.

But changing decades of failure isn’t easy. It’s going to take all of us taking action to demand a future free from endless war and filled with peace and justice.

Thank you for working for peace,

Faith, Stephen, Amisha, and the Win Without War team