Dear Friends,
As we have seen before, peacemakers go to prison, while the guilty go free.  GVCP has worked with activists Clare and Ellen Grady in the past. They are wonderful people and are dedicated to world peace.
As Clare enters prison, I propose that we adopt Clare as GVCP’s Prisoner of Conscience. The message below tells about the Plowshares movement and, specifically, about the Kings Bay Plowshares 7.  I have put the specific material about how to write to Clare in boldface.
I know that we are all bombarded with email messages that we can barely find time to read.  Still, I hope that you will read and respond to this letter.
Peace,
Arnie Matlin for GVCP
—–
Date: Sun, Feb 14, 2021 at 5:21 PM

Clare Grady started her prison sentence on Wednesday, February 10. She is one of the Kings Bay Plowshares 7 who entered the Trident nuclear submarine base in Georgia almost three years ago on April 4, 2018, to nonviolently and symbolically disarm omnicidal nuclear weapons. Her daughters, Leah and Rosie, and husband, Paul, drove Clare 11 hours from Ithaca, NY to West Virginia where they met at the prison gate with Clare’s sister, Teresa, dear friend Chrissy Nesbitt, and Chrissy’s husband David. She’ll be in COVID quarantine for the next 2 to 3 weeks so we most likely won’t hear from her during this period of isolation. She can receive letters, though, and her address is below. 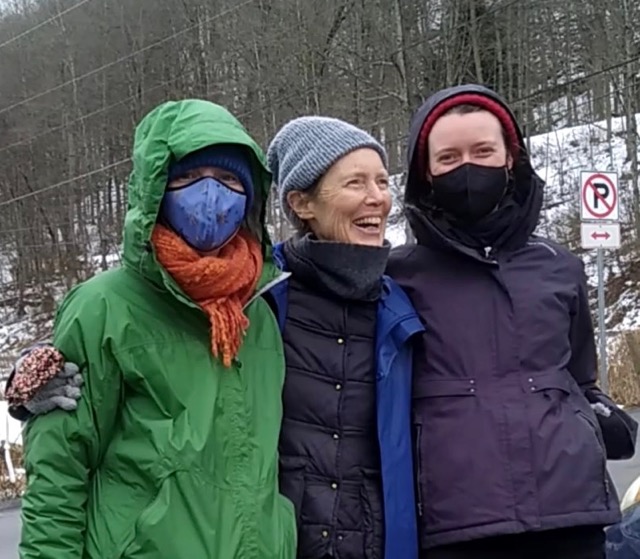 Clare with daughters, Leah and Rosie, outside the prison.

Here is a short video which is a blessing and a tune for Clare as she begins her prison sentence from Emma O’Grady (a cousin from Galway, Ireland), Oona Grady (a niece from Saratoga Springs) and James Gascoyne. Thank you to them! We know that Clare would want us to widen this circle of thoughts and prayer to include all prisoners.
https://drive.google.com/file/d/1dZxV896hUI62p48DI0UKzYd4BUxLZM4Z/view?usp=sharing
Clare Grady #01264-052
FPC Alderson
Federal Prison Camp
Glenn Ray Road, Box A
Alderson, WV 24910
You can find jail addresses at the link below for the other KBP7 in prison who can receive letters and postcards written with blue or black ink on white paper. The letters are photocopied by the prison and only the photocopy is delivered to our friends. Use your full name (no abbreviations allowed) in the return address on the envelope.
Important! Our friends will not have your return address unless you write it on your letter, as the envelope will not be given to them.
Prison addresses: https://kingsbayplowshares7.org/jail-addresses/

Member of European Parliament, Clare Daly, speaks about 62-year-old protester to Trident, Clare Grady, along with Julian Assange, as Dublin’s representative in the E.P.
“Enough of the EU’s Russiaphobia. Stop abusing human rights to advance the interests of the arms industry. We should be engaged in dialogue, not war.” https://fb.watch/3E0-MqQibU/

In case you missed it, you can watch on Youtube Clare Grady’s Feb. 7th, 2021Virtual Festival of Hope, a celebration as she embarks on her federal prison sentence for disarming Trident’s nuclear weapons with the Kings Bay Plowshares 7.
Below you can find the timestamps next to the names of listed speakers. The intro was clipped off accidentally, so read below until Mark Colville speaks.
Facilitator & Intro: Greetings. I’m Mary Anne Grady Flores, Clare Grady’s sister. This past Friday, Jun-San Yasuda, a Buddhist nun of the Nipponzan Myohojii order, and Irene Le, came to Ithaca, NY to pray and drum with Clare before she enters prison. Clare has joined Jun-San on her many walks for peace and justice over these past 40 years. We just played a snippet of that prayer time.

The Kings Bay Plowshares support team is hosting this event from the traditional homelands of the Cayuga Nation. The Cayuga people are members of the Haudenosaunee Confederacy, an alliance of six sovereign Nations with a historic presence on this land. The Confederacy precedes the establishment of New York State and the United States of America.